You think you had a rough childhood? Well I have proof to the contrary. I was digging around some old boxes and found a statement that my parents billed me for a couple lost retainers. (accidentally threw #1 away, then the dog chewed #2 only a few weeks later)
But seriously, do you see the "3 hours ironing" entry? Three hours?! Have never ironed that much my entire married life! 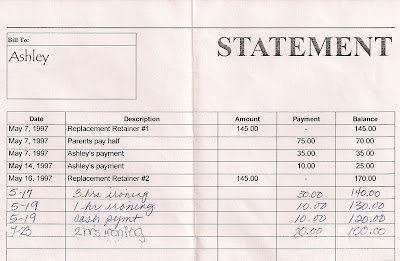 Poor, poor little girl- Ironing for hours on end. Had I only known I could have reported her for infringement of child labor laws! LOL (but at least I had a rockin' set of curly-bangs! Or is that a Chinchilla nesting on my pony tail?!) 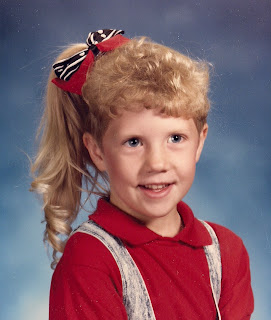 In all fairness I wasn't that young, in high school or something- but still. It's so weird I've kept it all these years. (Probably couldn't throw it away because it says I still owe my parents $100. )
Posted by craftyashley at 1:30 PM
Email ThisBlogThis!Share to TwitterShare to FacebookShare to Pinterest