I was watching this, (thanks Sarah!) and got to thinking about my husband's track record with gifts. The man tries so hard... but just doesn't seem to get it! The all-time most awesomely-horrible gift was our second Christmas together. When I unwrapped the Christmas present from my dear and loving husband, I was filled with excitement thinking what he would have chosen for me. After clearing away the wrapping, this is what I found: 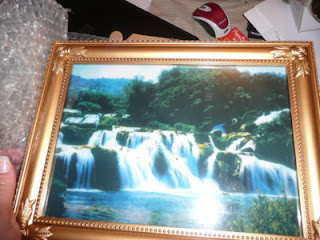 This is merely a likeness of what I was given. The actual gift unfortunately met an untimely fate with a large waste receptacle shortly after hanging on the wall and "giving it a shot."

Yes, what you are seeing is, in fact an illuminated picture of a waterfall. Yep, I can feel your pain from here. He explained to me that it was the perfect gift because.... I like... art! (being an art major at the time, he was somewhat correct on this assumption)

He also thought it would be practical for a nightlight and it made the "soothing sounds" of a waterfall as well! I was almost offended.... well ok, I was offended, borderline on livid. The thought that he picked this out, assumed I would be overjoyed at having an illuminated picture of a waterfall on my walls, complete with garbled water noises... it was too much to bear. This man had lived with me for two years and had no idea what I liked. This was surely a sign our marriage was doomed to fail. (luckily for me, marriages do survive backlit waterfall art) I will never let him live it down. I still don't think he sees the problem with a light-up work of "art" that includes realistic waterfall simulation motion and sound that he found at Walgreens!

If you, unlike me, think these things are the bees knees, I have located a place where you can purchase one of your very own. I'm sure you're delighted.
Posted by craftyashley at 2:48 PM
Email ThisBlogThis!Share to TwitterShare to FacebookShare to Pinterest