It's Such a Chore

Confession Time: I have been holding out on you guys big time. I had these super fancy chore charts made, and I sat on the pictures and never posted about them for almost a year. A YEAR, FOLKS. Because at a certain point it becomes too long to even bring it up because then it would be AWKWARD. Well Maggie was asking around about chore charts and I absentmindedly snapped a photo of our wall and was kind of floored by the reception. (Twitter, you guys are so nice and make me feel all warm and fuzzy on my dark and spikey insides)

So I'm dredging up the pictures I took. (And kept hanging around in the cloud for all this time) And we'll try and make a proper go of it. Oh look! I only took three pictures of them brand new, and they're BLURRY. So you get current pictures as they appear today. Ooops. 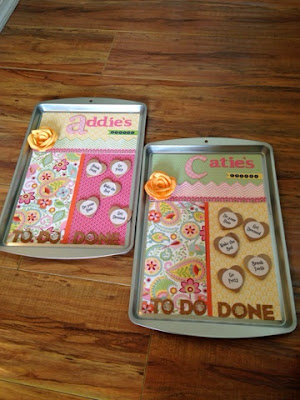 First of all, I should say I deserve practically zero credit in the execution of this project. I literally found this on Pinterest and sent it to my Mother, the Crafting Queen of my world, asking if she thought it was even remotely feasible. She got excited and very graciously offered to help. (aka: letting me use her enormous and well stocked Crafting Mecca as well as spoon feed directions to me for whatever she was not doing herself. (shameless plug) For this, I will be eternally in her debt because they are the prettiest things in my entire house, I'm tempted to get some gallery lighting to properly display the... children's magnetic chore charts. So beautifully and lovingly crafted to perfection. 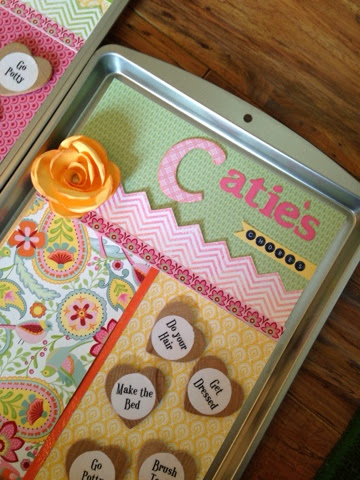 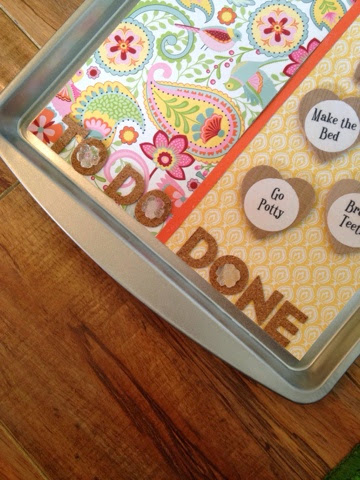 Of course over time, the little charts have taken quite the beating from my children and have had to be Mod-Podged back together again, and some of the glory has been diminished. (Little Man, for example has broken several of his magnets and sent the other survivors through the washing machine. 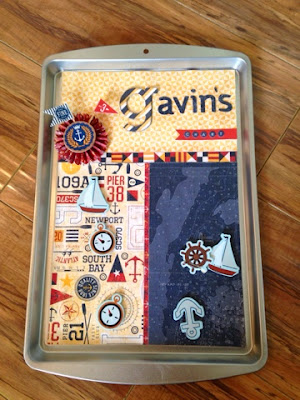 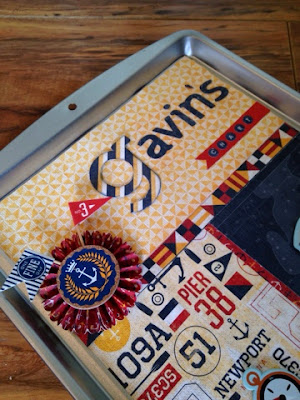 The girls' charts are only the necessary duties they need to perform each morning to be presentable for the day. To school, but including weekends too- the basics, brushing teeth, getting dressing, combing hair. The things that have all become second nature to us civilized people must first become drilled into these wild animals we call children. I swear they still ask me every morning if today they "still have to brush their teeth." AS IF THAT REQUIREMENT WILL SUDDENLY CHANGE.

We found it extremely effective the first few weeks. They would complete a task and move the corresponding magnet over from "to do" to "done." Little Man's is a lot more freestyle. He didn't have set chores at the time (still doesn't really!) so his pieces are just stock bits of balsam nonsense I picked up at a craft store with adhered magnets to the back. (they don't even really match, and the color clashing pains me) I told him he can move a piece to the other side if he goes potty. It was the least effective potty training incentive of all time, but as he gets older I fully intend to swap out the magnets for chores.

The base is really just a cookie sheet I found at the dollar store. I bought three. My Mom drilled holes in the top for hanging. We lined it with pretty patterned paper and let her Cricut cutter thing do the rest. (I know it seems like if this were a normal craft blog I'd have a Cricut sponsorship and a giveaway here, but I'm simply just not that clever, and this craft was completely out of the ordinary for me) In fact the making of the three charts took like 6 hours. (of mother-daughter chatting & smoothies) Do I need to further emphasize how not-a-crafter I am?

I walk past the little chore wall, right outside the kids' bathroom every day and it brings me silly amounts of pride. I wish every visitor in our house could see it. (Except the way the girls prefer to stack the chips in the done column; they it looks like a rocket, I think it looks more like balls and a *ahem* catch my drift, which is very UNFORTUNATE) That wall almost looks out of character for the rest of my house, it's so darned PUT TOGETHER and PROPER.

They're a great tool to help teach scatterbrained children to focus learn the morning grooming routine, as well. (beyond just looking so pretty!) The girls initially needed to do a lot of checking back with the chart to make sure they were on task. Eventually they got the hang of it, and need it less and less. (Now if there was just a way to keep them from distracting each other with little games, it would greatly reduce our morning routine!) Like I hinted to earlier, the chore charts have taken a beating. The early elementary age is not the most careful with things. We had initially just used a Tombo adhesive for all the papers, and would I do it again, I would probably suggest Mod Podging everything down tight before handing it over to little hands. Seal that beautiful paper like you are locking down Fort Knox, or else there will be casualties.

I'm actually thinking about redoing them this way because the adhesive below made the Mod Podge I put on after the fact pucker the paper up all over and it is somewhat of a hot mess now. (I hope I was able to hide that fact in the pictures mostly, but let's face it, I'm not a magician)

This is becoming The Post That Never Ends. So I'll wrap it up. I love how the project turned out, and it has been quite useful! I like that the chore tiles are magnetic and they can move them from "to do" to "done" without my assistance, and they have proven to be quite sturdy in that regard.

I would like to be able to add more chores- perhaps create a secondary board for the general child population, of chores that need to be done sporadically? This would entail creating an entire household SYSTEM from scratch, and I'm simply not up for that at the present moment. Stop typing, Ashley! Sheesh!

Posted by craftyashley at 9:36 AM
Email ThisBlogThis!Share to TwitterShare to FacebookShare to Pinterest