I'm a big softie when it comes to animals. (as may be evidenced by my continued care and sheltering of The Dog Who Pees on Everything) I cry during the ASPCA commercials... in the arms of the angels... SOB!.... dogs with big, sad-eyes... WEEP!

One night as we were preparing to go to head up to bed, we let the dogs in from outside and noticed they were cowering by the door and racing inside- not normal behavior. It was then we noticed the small black and white tabby lazily strolling through the grass. No collar, no tags.

I could feel the drawbridge of my heart opening up... this cat was so little, so purr-y, so loving. I know there are coyotes in the desert beyond our housing development. And probably a smattering of poisonous snakes, too. It became clear to my warped, horribilizing brain, that this cat was in IMMINENT, LIFE THREATENING DANGER. Clearly, there was a puma crouched right behind our yard... just waiting to pounce and devour this poor little kitty. The Husband scoffed at me, reminded me that I am deathly allergic to cats... and already had two dogs and three kids to keep away from the pouncing puma. (and rattlesnakes)

The image of that poor cat bothered me all night. Nagging away at my sensitive side; in which I am solely responsible for the life or death of every single animal on this planet. I decided I could at least leave a bowl of water out for the kitty... if it survived the night...

I agonized over the whereabouts of the kitty for the next few days, checking the bowl for traces of cat. Trying to discern whether the water was being lapped up by a thirsty stray, or evaporating in the 110 degree heat.

Then we met our new neighbors- the nice neighbors that fixed our tree- I asked casually if they, perchance had a cat? A white and grey cat? They told me yes! They have two cats; the grey one and an orange striped one. Both cats were out of sorts about moving three doors down and had started prowling the neighborhood, having found out how to use their new doggy door.

The knot in my stomach disappeared; stray cat has a family! I am not directly responsible for this cat! Hallelujah!

The woman apologized profusely and added, "they probably just want to play with your dogs." HA. Play... with my dogs who don't like any ONE or any THING new. Yes, have fun with them, cats.

The orange cat, Pooh Bear, has made it a point to visit our backyard (and whip the dogs into a tizzy) every morning while the grass is still dew-y and cool. The girls LOVE THIS. Kitty is our new best friend. They abandon their bowl full of Cheerios and dash out in the yard to harangue the new visitor. 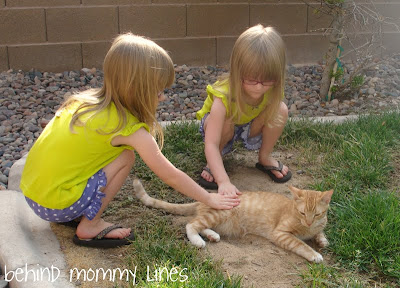 He's a sweet cat, that puts up with a lot. 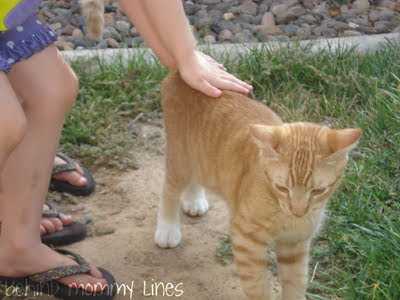 The girls started lining up rocks next to him- as they informed me "it's for his collection!" Every cat simply must have a rock collection, yes. He seems to enjoy the offerings brought to him by his avid admirers. The dogs are still shaking in the farthest corner, only puffing up their tails and strutting around when they put a sliding glass door between them and The Intruder. My dogs mean business... when there is no actual threat to be had.

I have also been reminded that I am still fiercely allergic to cats. I would pet the kitty, then wash my hands with soap. Minutes later I would be sneezing, sniffing, and my eyes would be fire-engine-red. Lovely. I tried NOT petting the cat. Somehow, the kids, drenched in cat hair, dander, etc. would start off the chain of allergy again. Mark me Non-Plussed on the cat situation now.


Posted by craftyashley at 12:48 PM
Email ThisBlogThis!Share to TwitterShare to FacebookShare to Pinterest