The Do's & Dont's Of Disneyland... but mostly Do's

A couple months ago I received a phone call from my Dad. My Mom was going to be awarded a very prestigious honor at Close To My Heart's convention in the summer. This was going to be a big deal for her and to make it extra-special, the company (oh how I love them to pieces!) wanted to fly us all out to surprise her onstage. Even better? Convention this year was in Anaheim, California: At freaking Disneyland. I was all about it and obscenely excited. I was also naively unaware at just how hard truly surprising my mother would be.

I happen to be a certifiable lunatic when it comes to obsessing and planning out even the smallest of ventures- so a roadtrip to Disneyland? I was borderline comatose with fretting. Normally I take my plight to my Mom, who has the unfortunate task of listening to my crazy rantings. First I had to decide flying or driving? Flying would involve hauling three carseats onto a plane, renting a car once on the ground, and going through security with my brood. My stomach turned at the thought. Then I had a flashback to a plane ride we braved last year in which Little Man had an extraordinarily foul blowout as we were sitting on the tarmac. No one could make me put myself through that again. Driving won out. It turned out to be just a hair under 4 hour drive = completely manageable. (as long as the DVD player was rolling. I firmly believe all vehicles should have a DVD player)

I also had to dress up my sweatpant-loving family to look even semi-appropriate when thrown into a fancy schmancy award ceremony- no small feat, I assure you. I would elaborate on the very poor experience I had with Shabby Apple, but I feel my good friend Janssen called them to the carpet right proper.

The general planning of a trip is hard enough for me and my type A personality. But keeping my ranting off the internet? That gave me an ulcer. Also playing a game of hide-and-go-seek with my Mother staying in the same hotel, almost sent me to an early grave.

The surprise went smoothly- I think she was genuinely shocked... we're THAT good at keeping something under wraps. Big thanks to Close to My Heart for making it possible.

So! The trip! And the sage lessons I learned from it! Onward: 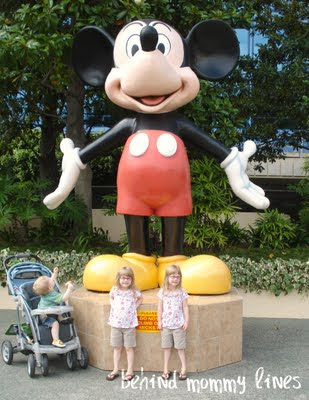 I feel like I did a fair amount of preparation, and upon arrival at the real event- it was like a trial by fire! Traveling, themeparking, doing anything with three bitty ones in tow- amplifies the intensity ten fold. Also, we were smack in the middle of the busiest season for the Disneyland resort- couldn't get around that one. We managed, even with the crowd and the heat (though it was technically cooler than home, we were under the sun's firey glare all day)

Some helpful sources I found? Maggie's recap was a great jumping off point. I practically chained the reference book "Unofficial Guide to Disneyland 2011" to my person... until I forgot and left it in the car for a couple days.

Here are some things to consider when planning a trip to Disney! Land! With Kids!

- Bring hats. For everyone. Or else your forehead will become crispy. (like mine) The girls' had adorable hats from Bella Sol Bebe. I highly recommend them, and we get lots of compliments whenever the girls don them. Of course I didn't get around to the hat agenda until the day before our big trip, so I did not order one for Little Man. He got a Target hat which worked pretty well. 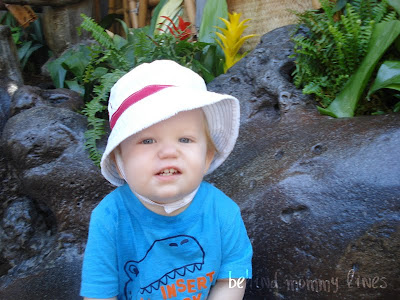 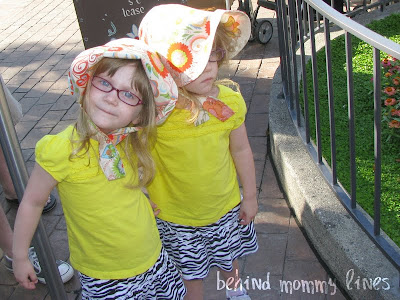 - Bring sunscreen. My brother chuckled when I told him I had 100 spf screen. It does exist, and it is fantastic. We used Neutrogena's Ultra Sheer Mist, and loved it. Remarkably, I was the only one who got burned... after spraying up everyone else, I forgot my pale self. Our little glow-in-the-dark-caliber-white kiddos returned just a pasty as when we left. I think I should get a medal of honor for that.

- Get to the park early. Very few members of our party were excited to wake up at such early hours to head over to Disneyland. (7am... so early for a certain little brother in his twenties) However, it turned out to be the only way to get the kids on rides without endless waiting in lines. If you stay at a Disney hotel, they let you get in an hour early before the rest of the riff raff on certain days. This was invaluable. After naps, we couldn't get on hardly anything. So we did other things after naps... like eat. And watch the Princesses Bedtime Story channel that ran in loops on the TV.

- Plan out your Fast Passes. Again, if you stay at Disney hotels you get some pretty valuable perks. One of these are fast passes that allow you to get tickets on a ride and bypass the line. The only catch is you have to get your tickets a certain number of hours before getting on the ride. We had to do this with precision, getting tickets in the morning to the really popular rides (Space Mountain, Thunder Mountain, Tower of Terror, etc) so the adults could go ride the fun stuff during the afternoon slumber later in the day. It was so great having three extra adults while doing the park. Naptime for kids meant one of us parents could go play on the more adult rides. By evening, the parks and outlying Downtown Disney swarmed with people and crowds. (I'm claustrophobic, and heavy crowds just make me extra stabby)

- Cash out your retirement or go "off-resort" to eat. Sure it is darned convenient, but the Disney folks know how to corner you and grab your cash. Somehow, no matter what we ended up ordering, our check always came out over a hundred bucks. Just be prepared. Sometimes it was worth it to drive over to Burger King and feed the whole gang for under $30.

- This is why you need a car. Sure, you can take shuttles and such around to avoid renting a vehicle; But having the option of tooling around Anaheim at our will was invaluable. Our family became well acquainted with the Target on Harbor Dr. (could I really stay away from Target? Nay)

- If you are going to eat anywhere on the resort corridor, make it The Jazz Kitchen. Best food we had all week; by far. They also had a three course meal for $30, which was pretty "affordable" for Disney fare. It was amazing. My Mom took pictures of our food... because apparently we are those people. 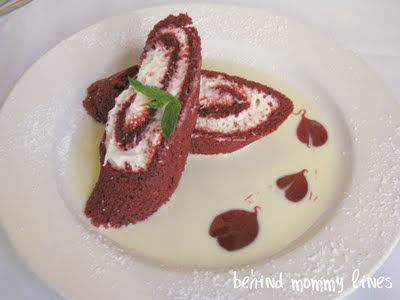 - Get yourself a Craigslist stroller. We had given away our double stroller, sure we would never again need a double stroller. (enter snarky comment about me getting trash-happy after an episode of hoarders)

I was hesitant to bring along my super sweet Bumbleride stroller, as I'd heard about themepark stroller theft. (gasp!) Disneyland rents out only single strollers for $15/day. But we'd need three, and in turn, three adults to push the three strollers. AND- the walk to the resort, even from the Disneyland Hotel was kind of exhausting. Something no four year old could reasonably do. I scoured Craigslist for about five minutes and found a single for $20, and a double for $30. Score. 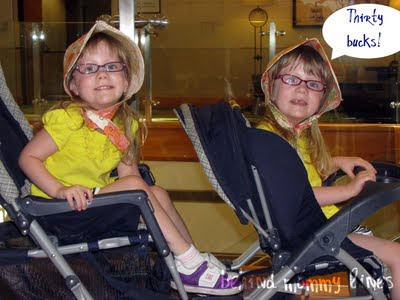 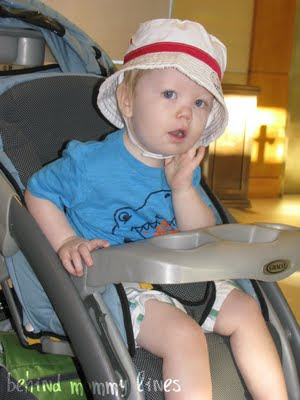 It was so nice to leave the strollers all willy nilly at the "stroller parking" and not worry about it. We had luggage tags on them "just in case," as well. The double stroller we bought was CLEARLY on it's last, um... axle. The rear wheels groaned and turned at awkward looking angles, but it held up the whole time and we promptly found a dumpster for it at the end of the trip. Still thirty bucks well spent in my estimation.

- Pack snacks- duh. It's just easier to throw a granola bar and some Capri Suns at a wining preschooler on the way to the next ride. For the drive, I made and packed these little beauties:

I was so excited! Fresh fruit! Yogurt! Yay!

The kids promptly hated them. I took one bite and was in love. I ate the rest of the bag. Snacks for grownups aren't bad. We brought a cooler, but didn't end up using it much as our room came with a fridge. (enter another trip to Target to stock up on goodies... and cereal & milk)

Ok, y'all. I am super tired of typing now. My fingers are threatening a walk out. So we'll talk hotels later.

Posted by craftyashley at 4:48 PM
Email ThisBlogThis!Share to TwitterShare to FacebookShare to Pinterest