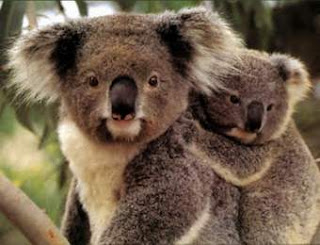 (photo cred)
Oh how we can relate, my fellow Mama. Add an exhausted grimace on my face, and we're there. As I may have said before, Little Man is the definition of CLINGY. The kid just wants to be on my person at all times. Not only is this a hindrance when I want to say, take a shower, do the dishes, or get a little bit of shopping accomplished... but dude! The boy is heavy! I am used to the girls- you know, the tiny twins who hung around ten pounds for an eternity. Little Man just turned 13 months, and he's got to weigh about 30 lbs. by now. He's a chunk of lovin, that's fo sure! My arms are yelling at me, threatening to call it quits and fall off. (quite an unappealing idea- being armless)
Luckily, I have found a quick in-a-pinch solution to all this agony... siblings. Thank heavens for the twins! And the fact that they have had absolutely no trace of the dreaded "first born syndrome." (probably the result of being born with a sibling straight off the bat) They love & embrace little brother... and play with him! (mostly without overly hassling/tackling/fighting with him) It's truly a miracle of epic proportions.
Like yesterday after naps, I desperately needed to fold some darned laundry! The piles of clean clothes were getting dusty! There was no way I was washing those clothes again. No, sir!

As I began to tackle this task, the girls chimed up with requests to "help Mama!" I just wanted to get this stuff d.o.n.e. and in a hurry. I couldn't waste more time and mental consumption having the girls "help" with the laundry. (ie: clothes strewn, bunched, and stacked all over the place) So I told them exactly how they could help Mommy.
"It would really help Mommy if you could play with the baby in your playroom." I chirped in my best sing song-y voice. (their playroom being right off the master bedroom where I was trying to make a dent in the mountains of clothing) 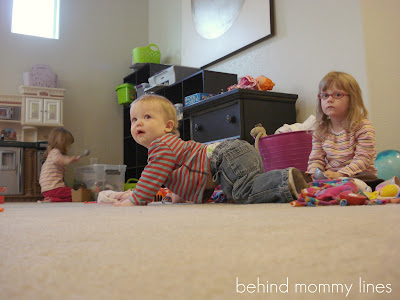 It worked! And contrary to what Bunny's face may be telling you, everyone was having a ball. If there's anything Little Man loves more than uninterrupted Mama attention, it would be unadulterated sister play. He looks up to those two as I'm sure all little brothers look up to their awesomely cool big sisters (wink, wink, Trent) ...Sometimes it's disturbing because I know he's thinking about jump-flying off the arms of the couch as I'm chastising the girls to "Stop it! Right now!" In the end, the girls gave me about ten minutes of practically uninterrupted time to get crap done. It was incredibly nice; And it made me rethink my previous stance of "three kids is just three too many." (well for a moment there) When they play so sweetly altogether, it melts my heart plain and simple. It also has a practical side of giving the Koala Mama a much needed break!
Also, an update on the loft mini-makeover? 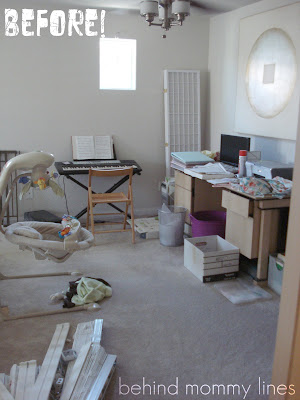 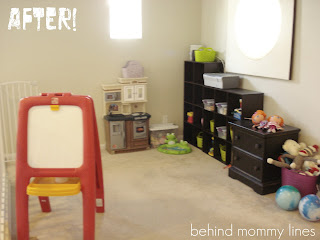 Turned into coveted playroom separate from the downstairs play area (the whole of downstairs, pretty much) + supervised yet contained area of play upstairs. 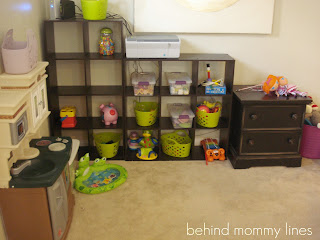 Can I get a big fat AMEN for toy storage! The green bins are baby safe. The "locked" clear bins are for 4 yr olds only (ie: small ingestible/choke-able parts)
After an extensive search of craigslist offerings, drooling over West Elm's furniture, and even a pondering about ordering some CSN Stores stuff, I cheaped out and got some Target sale items. I don't regret it, they'll work for now, and seem to be holding up just fine.
It is light years away from the classy and designer look I was going for. However, after deciding to sell the house, we don't need designer right now! Just functional! And boy, howdy it is functional! Yay for playrooms!
Posted by craftyashley at 10:53 AM
Email ThisBlogThis!Share to TwitterShare to FacebookShare to Pinterest