More Proof That I Am The Most Random Person Ever

I don't really have a whole "thing" to write about today.  Just a bunch of little things- and some pictures/video/stuff  that have been begging to be posted. (I am nothing if not a gracious host to my picture file) Try and keep up!


Boy meets car. The inherent differences between boys and girls amazes me. Honestly, I thought a lot of it was more nurture than nature. But way to go, nature! Proving me wrong! That was all he did this morning, push the toy car around and around. Pausing to yell at it when it hit an obstacle. Now let's gloss over the fact he's playing with a pink and purple minivan. (details, details) The kid plays with his sister's toys more than his own. (part of him wanting to be a big-kid and a part of the "herd") But still. The girls usually ignore the cars as functioning vehicles with wheels. They'll push the button on the driver's seat and dance to the most annoying song ever written. (clearing throat) "Open and Close! Open and Close! We're all in, now it's off we go!" Over and over, and over, and over.. you get the picture. Little Man, however, is enthralled with making it go. I am guessing he is gonna love the dumptrucks that will be under the tree this year!

Also- and I have debated all day about posting this picture- I was... bemused? Embarrassed? Too busy to care? When I caught a glimpse of myself in the mirror yesterday.


This is what I saw: 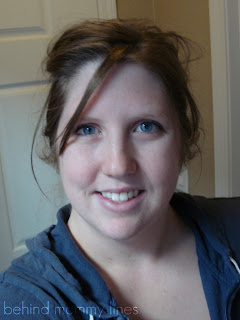 Look at that Dopey McDoperson! Hair everywhere, barely any makeup, smiling away for the camera. Exactly who is this person?! I used to at least take a reasonable amount of pride in my appearance! Somehow this has changed- and I look like a homeless person! I'm surprised a bird didn't try to nest on my head as I went about my errands! Yes! I went out in public looking like that! Yikes!
Note to Self,
TAKE A SHOWER, YOU BUM!
Regards,
The Management
During The Husband's vacation last week, we did a lot of... sitting around. Both of us were exhausted and really needed a break. We were even so desperate as to throw on a movie for the girls downstairs while we snuck upstairs during the baby's morning nap and took a nap ourselves! It was so dastardly! I can't believe we got away with it! So while we were having a relaxed and casual week, the girls were brewing up a raging case of cabin fever. The Husband and I drew straws on who took them out to run off some of the crazy at the park. I was the... winner? It was a cold, and windy day. Probably more like a spring day for anyone who lives outside this wretched desert. To me- it was fa. reezing. Still, I got some great pictures of the girls having fun. (minus the feeling in their hands) 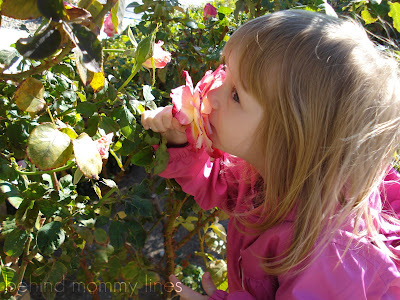 You know you want to throw your sniffer into some roses. 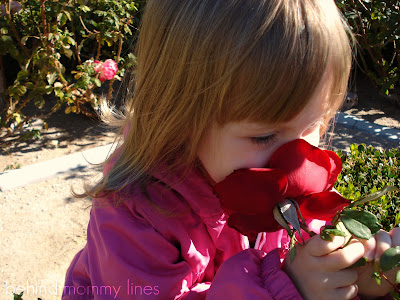 ... especially when there is a "Please don't touch the flowers" sign. I'm going with the argument that my kids can't read yet. I think it would hold up in court. (we being rampant flower sniffers and sign ignorers) 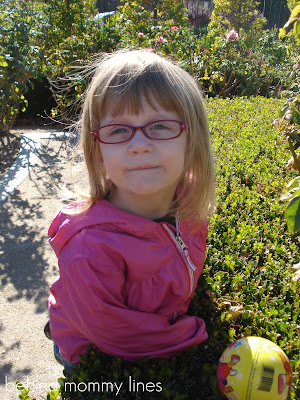 How cute is Bunny in her glasses? Of course I am inordinately biased. Yet I cannot decide if she looks cuter with or without the specs. She looks totally different each way- but still nothing shy of adorable. 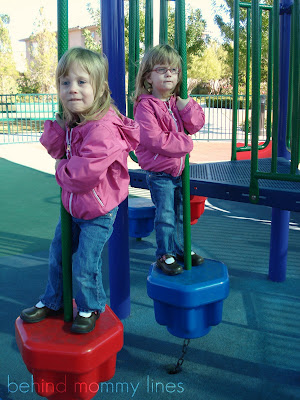 I hate this part of the play structure. I know- it's for older kids. But does that stop the twins from wanting to be on them? No. They freak me out. An ER visit in waiting is what those things are! Why can't you just be a bit more nervous, girls?! I'll seal you in a protective bubble, no problem! Just say the word!
Posted by craftyashley at 11:29 AM
Email ThisBlogThis!Share to TwitterShare to FacebookShare to Pinterest