This is why I'm mean

So when you move into a new house, there are a few things that just come with the territory. New-build homes have big flags! Big signage! It's like one-stop shopping for any and every door to door salesmen! Need blinds? (Of course you do! We all know it!) Landscaping? (Yep, you need that too!) Alarm Systems? Pest control? The pest control people have been especially persistent. People ringing our doorbell at all hours of the day is... pesky... bordering on driving me insane. The kids go nuts, the dogs are barking, it's a circus!

So I put up a No Soliciting sign. And it cut the salespeople in half... but still- people were coming to try and sell me stuff! I had just about had it, so I broke out the Sharpie marker on the front of an envelope and wrote in super-big letters:

Seriously, we don't want whatever crap you're selling!

'Cause I was serious about this. NO MORE.

And that did it. No more pest control guys. No more alarm system shmucks.
But there was a side-effect. Everyone who was invited over would always comment on my little sign. One of my friends even expressed that they thought it was a little mean. And I don't know, but some people find the word "crap" a bit offensive? So I took it down this weekend. I didn't want to be the mean lady. I replaced it with a polite, simple, regular No Soliciting sign.

Two. Days. That's how long it took for pest control guys to start ringing the bell again.  Seriously. This is exactly why I have to be mean about it. I am tired! So I'm putting up a crap sign. Yep.

You know who's fault this is? Why I have to use "language?" It's the sales people. You annoying peddlers of stuff I don't want. 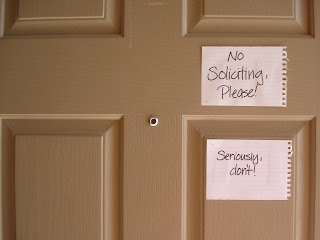 Let's see how this will work.
Posted by craftyashley at 7:27 PM
Email ThisBlogThis!Share to TwitterShare to FacebookShare to Pinterest