I am a California driver. Merging through 6 lanes of traffic going 65? No problem. Speed limits? What are those? I'm going 95! It's great. They aren't so up tight around here about merging into your lane. They don't care. Vegas drivers are so obsessed with keeping as few people in their lane- it's stressful! And there is no rubbernecking at minor fender benders. Just get from point A to point B. Fast. Yes, this is my kind of place. The only reason I'm crossing it off the list of places I'd like to live is that a Target is quite a drive away. No can do- sorry, California!

Here are some pics from The Zoo: Take 2 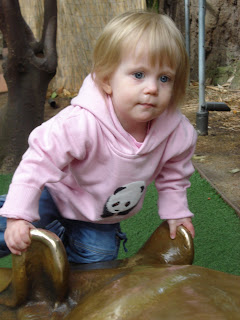 Climbing a bronze hippo. The real hippos were still sleeping. So climbing on a fake one was the next best thing. 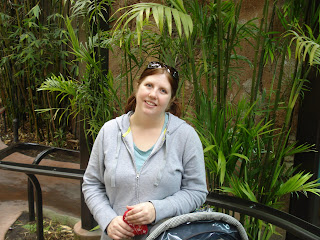 The husband argued that there were no pictures of me. So he made me put this one up. No giggling please. 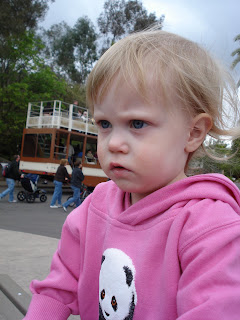 This is Squirt's serious face. Every animal deserved a certain amount of concentration and serious observance. 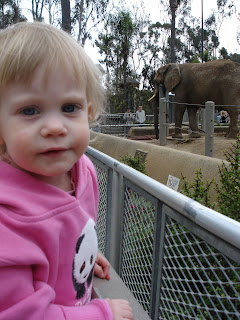 The elephants were Squirt's favorite. Although they smelled really bad. 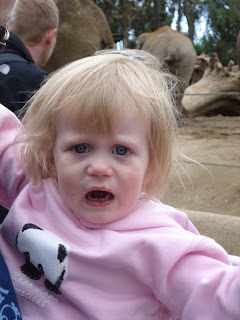 There was a slight incident yesterday in which a small monkey became very curious... nay, entranced with Teh Bunny. She was, for the most part terrified of every animal after that. Except for the tigers, she liked the tigers oddly enough.
But for the rest of the exhibits this is what we got along with a frantic "No! All done!" Can you see the sheer terror? 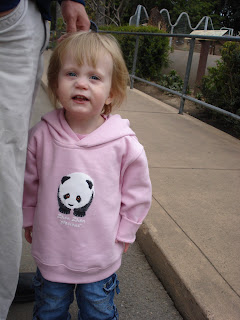 And then, as if playing jedi-mind tricks on me decided to be totally fine with the zoo and even smiled and said "cheese" when I whipped out my camera. Go figure. 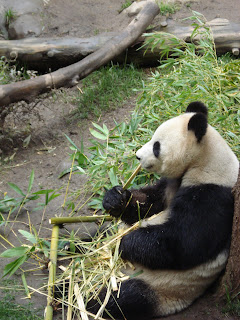 Wanna see a panda? We did. She was eating breakfast. Don't those bamboo shoots look tasty?

Who needs entertainment and toys when you have a swivel-chair in your hotel room!

Ok. So that's all with the pictures. The girls are supposed to be napping now. Having trekked around the entire zoo, they should be exhausted. But they refuse to sleep. Meaning I can't have a nap either. This only further cements my hatred of travel. Never again, folks. Never again.
Posted by craftyashley at 1:27 PM
Email ThisBlogThis!Share to TwitterShare to FacebookShare to Pinterest