We thought we had avoided the dreaded lovey. Having to carry around a too-worn blanket or stuffed animal. Having to worry if we had lost the lovey, left it at home, etc. Ebay is littered with frantic parents searching for a duplicate lovey- willing to pay any price! My girls have been attached to no toy. They liked toys, but nothing in particular had to follow us everywhere.
That all changed yesterday. The Squirt became extremely attached to this stuffed bunny- the only stuffed animal we have only one of. So, of course Bunny was jealous and I could see things were deteriorating fast. A quick run to Target yielded two identical stuffed monkeys.
Now we officially have loveys. We can't go or do anything without them. They can't take monkey into their highchair- so it's a decision between food and monkey. Monkey is winning! Agh!
Logan and I have decided to squelch this before it gets too bad. Tonight... after the girls are asleep, we're planning a stealth operation to snatch and trash the monkeys. Hoping that all the fun of Christmas will make us forget monkeys ever existed. It's cruel- but necessary! 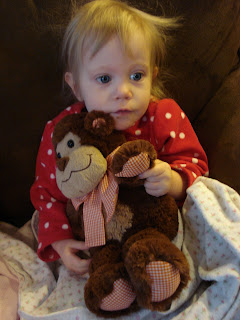 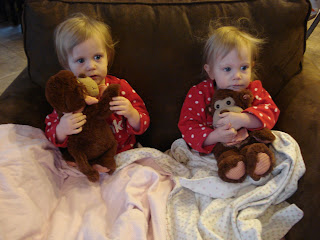 Posted by craftyashley at 8:36 AM
Email ThisBlogThis!Share to TwitterShare to FacebookShare to Pinterest